Charith from Bridge Street in the house.

I am so, so excited about today's guest post from my sweet and oh, so talented friend Charith! Did I mention that not only does she have uber baking talents, but she is also an amazing seamstress?


Case in point, she entered one of her dress designs in Shabby Apple's Dare to Design Contest, and it was chosen in the top 15!! Her dress is so dang cute, I just may be asking her (begging her) to make one for me! (her dress is #7) Voting ends November 15th, so if you haven't voted yet, head on over and take a peek at the slew of cute dresses and cast your vote for your favorite!!

And now for your viewing and baking pleasure, I present to you...Charith!


Hello, recipe seekers! I'm Charith from Bridge Street, an itty-bitty blog where my sister & I talk about sewing... mostly. But a girl's got to eat too, so Tiffani was kind enough to let me share three of my favourite apple recipes. Thanks Tiff!
In each recipe I didn't specify which variety of apple is best to use. There's a reason for that. The best variety is the free kind! But if there aren't any of those available, use the apple which is on sale. If you add enough sugar to any apple, it's divine. Well... maybe not the wormy apples. Anyhow, let's jump right in. 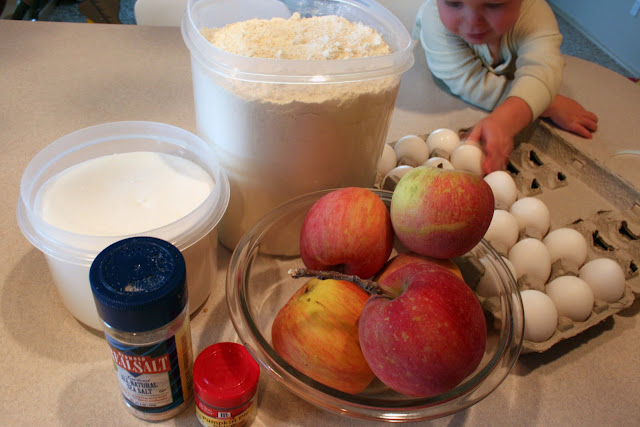 Autumn Apple German Pancakes
3-4 TBS butter
1-2 thinly sliced, peeled apples
cinnamon
sugar
6 eggs beaten
1 cup milk
1 cup flour
1 tsp salt
Add the butter and sliced apples to a 9x13 dish before pre-heating the oven. Sprinkle with desired amount of cinnamon and sugar. Put the dish with the apples and butter in the oven before you pre-heat it. This way the apples get a chance to cook before you put the batter in. Once the oven reaches 425º, pour the batter over the apples. Careful when pouring the batter, I've burned myself more than once. Bake for 15-20 min.﻿﻿
﻿ 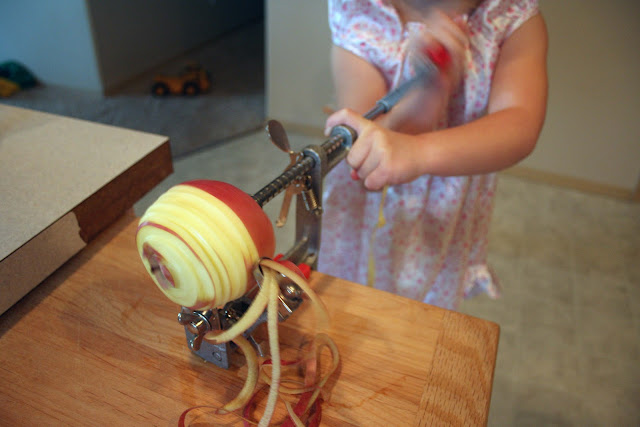 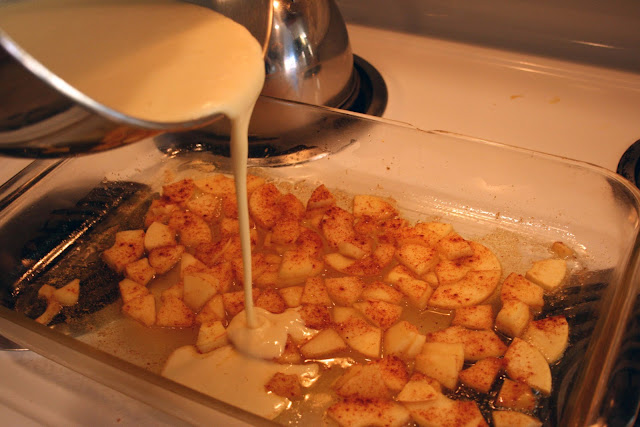 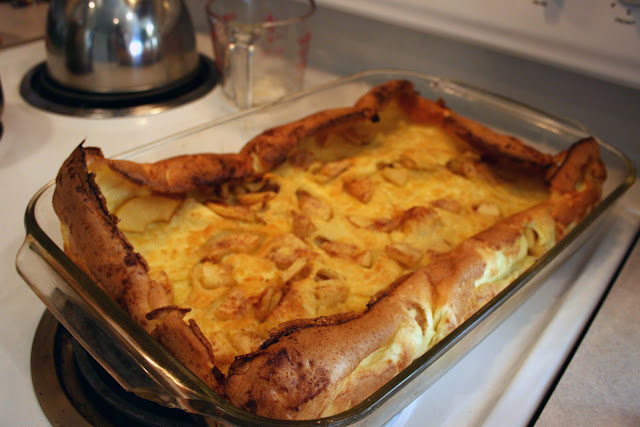 ﻿﻿ ﻿ ﻿ I was surprised the first time I made this recipe at how high the sides get. As you can see I let this one get a little crispy at the edges. I was probably changing a diaper instead of pulling it out of the oven. C'est la vie.
﻿ 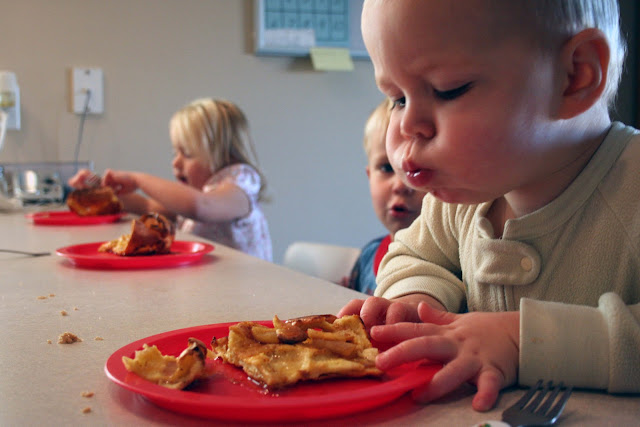 Serve with maple syrup while it's piping hot.

Recipe Two
Upside Down Apple-Raisin Muffins
Apple Layer
2 cups diced apples, peeled
¼ cup raisins
½ cup brown sugar, packed
1 teaspoon cinnamon
2 tablespoons sweet cream butter
Batter
2 cups flour
1 tablespoon baking powder
½ teaspoon baking soda
½ teaspoon salt
½ cup brown sugar, packed
1 cup buttermilk
½ cup sweet cream butter, melted
1 large egg
1 teaspoon vanilla
Preheat oven to 400°F. Spray a 12-cup muffin tin with non-stick cooking spray. For the apple layer, combine apples, raisins, brown sugar, and cinnamon in a small bowl. Melt butter in a skillet. Add the apple mixture, cooking and stirring over low heat until apples are tender, about 5 minutes. Cool. Spoon the mixture evenly over the bottom of each muffin cup.
For the batter, combine dry ingredients in a medium bowl. In another bowl, whisk the liquid ingredients until smooth. Add to the dry ingredients all at once, folding just until moistened. Do not over mix. Divide the batter evenly among the muffin cups. Bake at 400°F. for 20-22 minutes or until the tops are golden and a toothpick comes out clean when inserted in the center. Cool completely on a wire rack before removing from the pan. Carefully lift the muffins from the cups and flip them onto their tops. If any of the apple mixture remains in the pan, spoon it back onto the muffin. 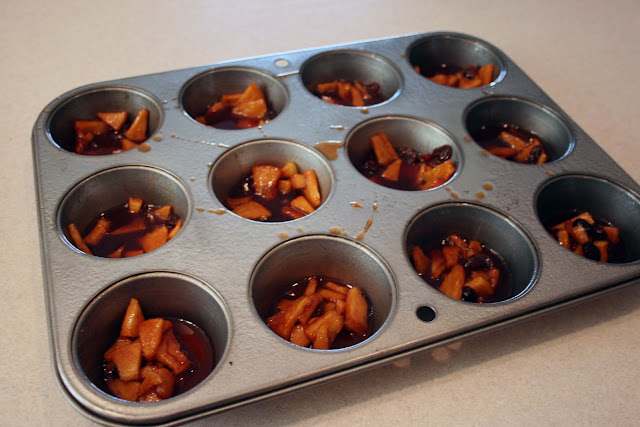 ﻿
﻿After cooking the apple mixture, before topping with the batter.
﻿ 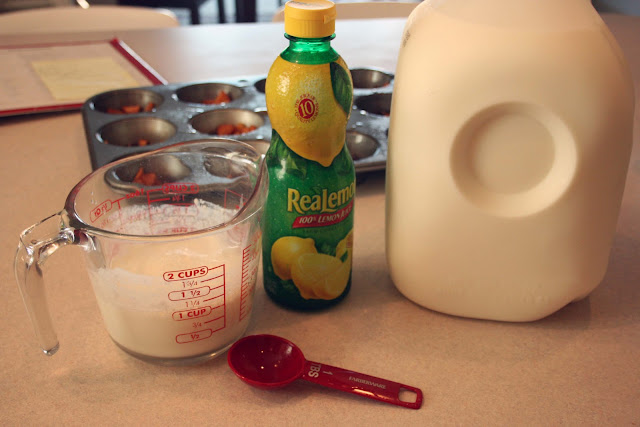 ﻿
﻿I was out of buttermilk and there was no way I was getting out of my pajamas to run to the store. Betty Crocker says, "Replace buttermilk by adding 1 tablespoon lemon juice or white vinegar to a measuring cup and filling with milk to the 1-cup line; let stand for 5 minutes." Sweet. I took Betty's advice and it worked like a charm. I couldn't tell the difference.
﻿
﻿ 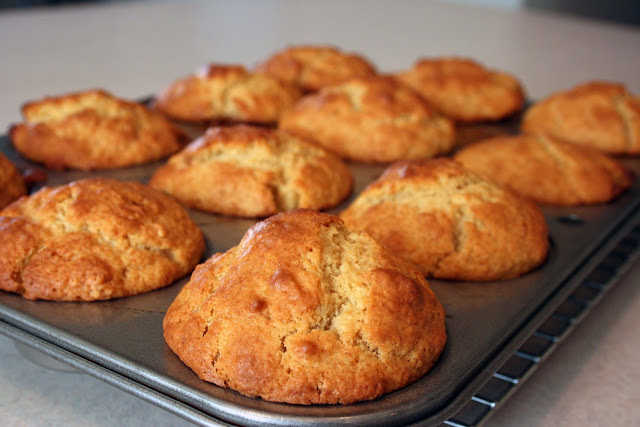 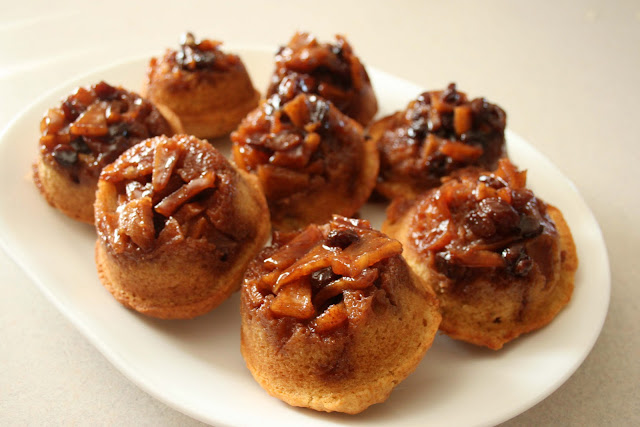 ﻿Up-side-down.
I'm not sure why, but I just feel a little bit fancy eating these. Anything with Upside Down in the title has got to be uber-delicious, right? And if you add uber to the beginning of any word, your fancy meter suddenly creeps up. Try it. You'll like it.

﻿
The Third of the Three.
My Apple Pie.
Several years ago I made a list of 25 things I want to do before I die. I have since lost the list, but I remember writing down "Kayak Hoeback Junction," and "Make and Apple Pie from scratch." Guess which one I've checked off.
The pie crust recipe was given to me by my sweet Mother-in-law who is one of the best cooks I've ever met. It's simple and it comes out light and flaky after you practice making it once or twice. Or if you're a born natural you'll get it perfect on your first shot. Guess which one I'm not. It took me a couple of tries before I figured out how to not mix the dough to death. That's the secret.


For one pie crust:
1 cup flour
a dash of salt
1/2 cup shortening
1/4 cup very cold water
I video taped the making of the crust. I spent at least an hour trying to edit the silly thing. Ughh. And all you get are these three stills from the video. I'm no editor, I've learned.
﻿﻿
﻿

﻿ ﻿﻿ Mix the flour and salt. Cut in the shortening until you get little balls the size of large peas. (See the pic on the left.) Sprinkle the cold water over the flour and shortening. Don't mix it too much. It's okay if there are a lot of "crumbs at the bottom of the bowl. (See the center pic.) Coat your hands with flour and shape the dough into a ball or a hockey puck. (See the pic on the right.) Cover with plastic wrap and chill while you prepare the pie filling and topping.
You're going to hate me after you read the recipe for the filling. I used to get frustrated when I saw a recipe with, "throw a dash of this in and throw a dash of that in." What in the world is a dash? I'm still not sure. And yet here I go, telling you to throw in a dash and worse.

The filling
5-6 large (free!) apples, sliced and peeled
1-2 TBS flour
a bunch of white sugar
a bunch of cinnamon
a bunch of pumpkin pie spice
I guess you just have to decide how much spice you like in your pie. I am a cinnamon fan. If a recipe calls for cinnamon I usually double whatever it calls for. If you like less, use less. I never measure the ingredients for this filling. I just dump stuff in. Because really, we're all in it for the crumb topping, right?

I tried something new this time. Sometimes when I use my Pie Crust Shield it sits on the crust and burns it where it touches the dough. So I tried putting two pecans on opposite sides of the pie. (See the pecans circled in red.) I was so happy with how it turned out! The crust was browned perfectly. The pecans were a bit toasted, but I just took off those two and tossed them.


﻿Bake your apple pie at 375°F for at least 40 min. I always test the apples in the center with a toothpick or a fork before I pull it out of the oven. If the apples still feel crunchy, keep on baking.
﻿ 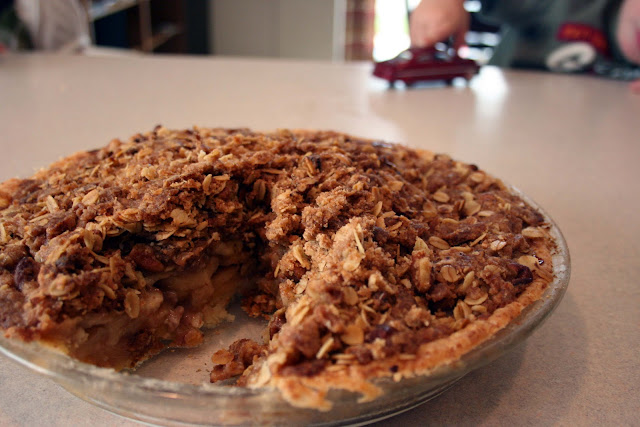 ﻿The finished pie. *sigh* If only it were Autumn all year round.
﻿ 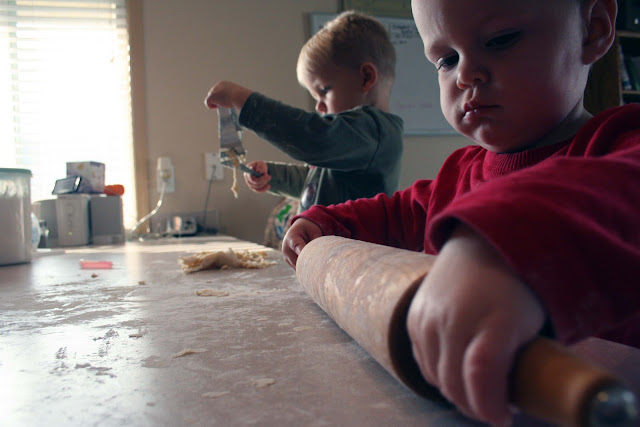 ﻿ ﻿ These boys were behind the scenes for the making of this pie. Last week a lady at the store remarked how difficult it must be for me to bake with my kids in the way. Here's a tip, lady: Give them a "job" and they won't be in your way... as much. My kids get all the left over dough I cut off the edges of the pie and they roll to their hearts content.

And with the dough they have desecrated with their sneezes and who knows what else, I flatten it out and put it in an oven-safe bowl. They get to make their own filling out of whatever left-over apples and spices I choose to give them. I figure all their germs get baked out of their pie and they can eat it or it can get tossed. Either way, they made something, and that makes us all happy.
﻿Happy baking with Apples, and happy baking with Kids!

I can't wait to try these recipes!

P.S.
Charith,
I love the picture of your little guy blowing on his pancake!

Love Charith, love the recipes...um, Charith, why wasn't I invited over when you were making these?

Hey, It looks delicious. You are a baker Charith! I am excited to try these recipes.

I made the Apple German Pancakes last night for dinner and they were a big hit! I generally don't like German Pancakes, but the apples and cinnamon really made a big difference. Thanks Charith!

Hi! I found your blog through the Blog Guidebook and so glad I did! Your apple recipes look so delicious and I am asking myself, how come I don't know about the pie crust shield. I am so going to have to find me one! :) By the way, your kiddos are so adorable. Look forward to reading more. Angie

So glad to have you!! So glad you enjoyed Charith's guest post! Her apple recipes are so yummy.

P.S.
I've never used a pie shield either, I think Charith's post has me convinced I need to buy one!

Dyson V6 is an incredible cordless vacuum cleaner. This cleaning machine is famous for its lightweight and powerful features. It can be used to clean a wide range of surfaces, ranging from hard floors to ceilings to carpets. The brand specializes in the creations of primary and secondary vacuum cleaners at affordable rates. Let's go for an incredible article about Dyson v6 review.

I love the picture of your little guy blowing on his pancake!

I mean those product is very useful.Many people likes this site and i also like this.From these reviews, you will get an idea about the specific features of this product.This blog is very useful for me.Thanks for sharing such a useful information with us.if you know more "Click here"

Very informative and useful post. You will be glad to know that I am also writing a blog where I review the latest technology for better shower experience.
Please do visit my site and let me know your valuable comments

how exciting! enjoy these last few weeks of pregnancy, it really is a precious time. even though only 24 weeks along, i have already begun the nesting stage so i enjoy seeing the sweet and simple items you've curated for your next babe. it's inspired me!Sinfa

Within a permissioned blockchain transactions are validated and processed by participants that are already recognized by the ledger. Even though this is the case, there is still a challenge and issue of trust. How can one ensure the blockchain is secure and trustworthy in order to avoid the substantial impact of a cyberattack? The answer is by building security into your blockchain technology from the start, through strong authentication and cryptography key vaulting.

tharker
Wife. Mother. Friend. I bake. I read. I talk. I laugh. I love.

Bake It and Take It! 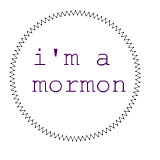